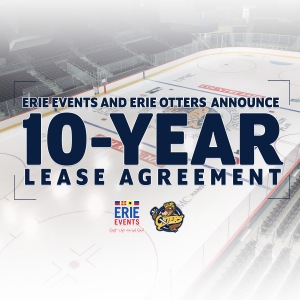 The Erie County Convention Center Authority and Ontario Hockey League’s Erie Otters jointly announced today that both parties have agreed to and signed a ten-year lease extension that will keep the Erie Otters in Northwestern Pennsylvania. The agreement sees that the Erie Otters continue to play its seasons in the Authority’s Erie Insurance Arena for an additional ten years, commencing with the 2019-2020 OHL Season.

“All of us in the Otters organization are pleased and excited to have our new ten-year lease signed with the ECCCA,” Erie Otters Owner and Governor Jim Waters said. “The Otters are very fortunate to call this fantastic facility home. I’m ecstatic to join our many fans and community partners in Erie in continuing Otters success for years to come.”

“We’re thrilled to retain this important business in Western Pennsylvania,” said John “Casey” Wells, Erie Events Executive Director. “Not only does our hockey team provide great entertainment, it generates a positive economic impact, creates jobs, and improves the quality of life in our community.”

Toronto, ON – The Ontario Hockey League today announced that 2015 NHL Draft top prospect Connor McDavid of the Erie Otters is the 2014-15 recipient of the Red Tilson Trophy awarded to the OHL’s Most Outstanding Player of the Year as voted by the writers and broadcasters that cover the league.

McDavid finished third in OHL scoring with 120 points in 47 games played recording 44 goals and 76 assists with a league-high plus-minus rating of plus-60 helping the Otters win 50 games for the second straight season earning their first Midwest Division title since 2002.  He becomes the second straight Otter to win the award and third player in franchise history to receive the honour following Connor Brown and Brad Boyes who won back-to-back in 2001 and 2002.

“Obviously it’s amazing, it’s such a special honour,” McDavid said. “It’s an award that’s really for a team. You wouldn’t be at this point without your teammates and all the coaches and everyone. I think it’s one of the most team-oriented awards there are. Obviously it means a lot getting your name on it, but at the same time, I owe it all to the boys.  You look at the list of names that have been there before and a couple of Otters come to mind, obviously Brad Boyes and Connor Brown. Just to be named with those two guys, let alone the other names that are on that trophy, it’s such an honour.”

The 18-year-old from Newmarket, ON, recorded a point in 45 of his 47 games played this season with an incredible 36 multi-point efforts and highlighted by a league-high 27-game point-streak.  The Otters’ captain led the league with three-star recognition in 32 games this season including 17 first star performances.  He received OHL Player of the Week honours for the week ending October 26 and was named OHL Player of the Month in October and February while leading the OHL’s Western Conference Coaches Poll with first place votes in three categories including Best Playmaker and Best Skater both for the second straight season, and Best Stickhandler for the third straight season.  A member of Canada’s National Junior Team, McDavid won gold at the 2015 IIHF World Junior Championship and was named a Tournament All-Star finishing tied for first with 11 points.

“We all know he’s an amazing player, playing in an amazing development league,” said Otters General Manager Sherry Bassin. “The real issue is, I want the world to know that he’s an amazing person. It’s his character as a person, it’s his inner drive to be the best he can. That combination with his ability makes him very worthy of this award. It’s a special award for a special person.”

The Red Tilson Trophy is the most prestigious individual award presented by the Ontario Hockey League.  First presented in 1945, the trophy is named in honour of Albert “Red” Tilson, who was killed in action in Europe during World War II. Tilson was the OHA scoring champion for the 1942-43 season after scoring 19 goals and 38 assists for 57 points in 22 games with the Oshawa Generals.

Accredited media were asked to select their top three choices from the 20 nominees submitted by all 20 member clubs.  Players received five points for a first place selection, three points for second place and one point for a third place selection.  In over 80 ballots collected, McDavid received 407 points in the voting process with first place votes on over 94% of all ballots.  Overage Player of the Year and New Jersey Devils prospect Joseph Blandisi of the Barrie Colts finished second in voting with 123 points, followed by Defenceman of the Year and Tampa Bay Lightning prospect Anthony DeAngelo of the Sault Ste. Marie Greyhounds and Arizona Coyotes prospect Max Domi of the London Knights who tied for third in voting with 79 points.

Eligible for the 2015 NHL Draft, McDavid is the top ranked North American skater by NHL Central Scouting.  He becomes the sixth youngest recipient of the Red Tilson Trophy behind John Tavares who earned the honour as a 16-year-old with the Oshawa Generals in 2007, and four other players who received the honour prior to their NHL Draft selection including Tyler Seguin of the Plymouth Whalers in 2010, the Whalers’ David Legwand in 1998, the Generals’ Eric Lindros in 1991, and Jack Valiquette of the Sault Ste. Marie Greyhounds in 1974.

McDavid’s 2015 Red Tilson Trophy marks the fifth different major OHL Award he has earned since joining the league after being granted exceptional player status as a 15-year-old by Hockey Canada in 2012 making him the most decorated player in OHL history.  As the Otters’ first overall pick in the 2012 OHL Priority Selection, McDavid received the Jack Ferguson Award and later earned the Emms Family Award as Rookie of the Year for the 2012-13 season.  Last season he received the William Hanley Trophy awarded to the league’s Most Sportsmanlike Player of the Year, also earning the Bobby Smith Trophy as the OHL’s Scholastic Player of the Year which he won again in 2014-15.  He becomes just the second player in OHL history to have his name appear on OHL Awards six times joining former Otter Brad Boyes who earned Red Tilson Trophy honours in 2001 and 2002, William Hanley Trophy honours in 2001 and 2002, along with the Bobby Smith Trophy in 2000, and the Wayne Gretzky ‘99’ Award as OHL Playoff MVP in 2002.

McDavid will be the OHL’s nominee for the Canadian Hockey League Player of the Year Award presented at the CHL Awards Ceremony during the 2015 MasterCard Memorial Cup in Quebec City.  McDavid will also be present at the OHL’s Awards Ceremony on Tuesday June 9 at the Hockey Hall of Fame in Toronto.

We have some exciting events coming up and we want you to come check them out! Mark your calendars and get your tickets now for the following games and shows:

The Erie Bayhawks are home Friday, January 9th at 7pm against the Canton Charge. They’re also playing at home Saturday night at 7pm versus Grand Rapids. 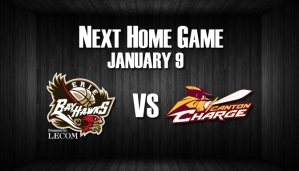 Lewis Black will take the stage at the Warner Theatre on January 9th at 8pm. Tickets are still available.

The Otters have a 5pm home game this Sunday, January 11th.

If you’re in the mood for a great performance, get your tickets now to Elvis Lives which is this Sunday, January 11th at 3pm.

Make sure you continue to check out our blog to find out the latest upcoming Erie Events! Buy your tickets now at http://www.ereievents.com, the Erie Insurance Arena box office or by calling 814-452-4857.

The Warner Theatre and Erie Insurance Arena will play host to some exciting events this week. Visit http://www.erieevents.com for ticket information on the following:

The Erie Otters take on Owen Sound Attack on Wednesday, December 3 at 7pm.

Straight No Chaser, the acapella sensation, will perform at the Warner Theatre at 7:30pm on Thursday, December 4th.

The Erie Bayhawks return home this weekend with a 7pm game Friday and Saturday night.

Also on Saturday night, the Erie Philharmonic will take the stage at the Warner Theatre “Come Home for the Holidays” with a 2pm and 8pm show. More information at http://www.eriephil.org. 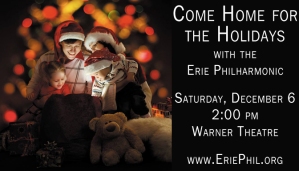 If you want to extend your weekend into Monday, get your tickets now for Sister Act at 7:30pm Monday night.

Another week is upon us at Erie Events and we’ve got a jam packed schedule. If you’re bored this Monday morning and you’re looking to fill your schedule with excitement, we’ve got you covered.

The Erie Otters are on home ice Tuesday, November 11th for a 5:30pm game. They play Mississauga Steelheads at Erie Insurance Arena. They’re coming off a win from over the weekend against the Saginaw Spirit. Get your tickets ahead of time by visiting http://www.erieevents.com or call the box office at 452-4857.

The highly anticipated “The Live Debut of the Christmas Attic” by the Trans-Siberian Orchestra will rock Erie Insurance Arena in front of a sold out crowd Friday evening.

Saturday, November 15th is a full day for Erie Events. If you’re looking for a free event, check out the PA State Yo-Yo Contest from 10am to 5pm at the Bayfront Convention Center. There’s also Christmas in the Country at the Bayfront Convention Center from 10am-5pm Saturday and 10am-4pm Sunday ($6.00 adults/kids 12 & under free.) Then you can head down to Erie Insurance Arena and watch the Erie Otters take on the Kitchener Rangers at 7pm. Tickets for that game can also be purchased ahead of time on our website.

If you’re looking for something other than hockey on Saturday night, the Erie Philharmonic will perform at the Warner Theatre “Tchaikovsky’s Fourth with Christopher Rose, Percussion” for an 8pm show. Tickets and more information on that show can be found at http://www.eriephil.org.

We wrap up the weekend Sunday night with the one and only Bill Cosby at the Warner Theatre. One of America’s most beloved comedians of all time will take the stage at 7pm. Get your tickets online at http://www.erieevents.com.

It’s the calm before the storm (if you will) at Erie Insurance Arena as the Erie Otters get ready to kick off the season at home Saturday night.

Behind the scenes preperations have been ongoing for weeks – from bringing merchandise into the arena, to preparing menus and food, to getting the mechanics of the new scoreboard down – everyone at the arena has been hard at work.

Aside from the excitement around the game itself, there’s another big reveal at the arena for the upcoming season.

The $1.2 million high definition scoreboard will be used for the first time during the Otters Saturday home opener.

The board is 8-foot-high and 15-foot-wide with state-of-the-art video capabilities.

Ed Snyder has been putting the finishing touches on the graphics for the scoreboard reveal. 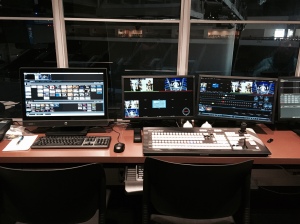 Before the game, the  Otters are hosting the 5th Annual Otter’s Home Opener Party at the corner of 9th and French Streets.

The party starts at 4pm with the puck drop set for 7pm.

If you’re looking to buy tickets to the game, visit http://www.erieevents.com.

“Connor was the leader on the team, who guys looked up to,” said Head Coach Kris Knoblauch. “He’s certainly very competitive, and a guy who wants to win and do the right thing. Obviously, he’ll have success personally but he also wants the team to succeed greatly.”

McDavid becomes the 10th full time captain in team history. He takes over the captain vacancy left by Connor Brown, who held the title for the last two years.

“It’s a tremendous honor to be named captain of this team,” McDavid said. “You look at some of the guys before me, (Connor Brown) and those guys, it’s something that is pretty special to me.”

McDavid, who is eligible for the 2015 NHL Entry Draft, and the Erie Otters open their season Wednesday night in Saginaw against the Spirit at 7:11 p.m.