The grass at UPMC Park has hosted thousands of baseball players and seen countless cuts and designs in the last 25 years.

But it’s seen one man rise the ranks to make sure it’s at its best for each game: Head Groundskeeper Brandon Schanz.

“It’s not always easy to be in his dirt-covered shoes, but he knows the importance of his role in developing the Detroit Tigers of tomorrow.  SeaWolves fans are fortunate to have someone with his work ethic caring for the playing surface at UPMC Park.,” said Greg Coleman, team president of the Erie SeaWolves. 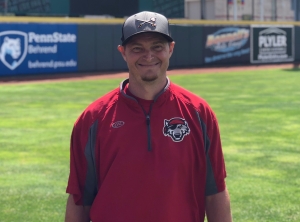 Happy 25, Brandon! We appreciate you.

Schanz’s path to the playing field wasn’t a traditional one. He actually started in the kitchen coming out of high school, and then became assistant director of concessions at 18. After switching to groundskeeping, he became the head groundskeeper in 2004.

“His passion for the SeaWolves and the pride he has in his work is unmatched in minor league baseball,” said Ed Snyder, assistant director of sports facilities. “The Erie baseball community is lucky to have Brandon and his crew looking after beautiful UPMC Park.”