A picture of an employee gathering for employees who had been with Erie Events for 10 years hangs from a wall in my office. My 20-year plaque from the Erie SeaWolves is to its right on the other side of the wall. My walls say it all: I’ve been here ever since UPMC Park, then Jerry Uht Park, was built.

One clarification before we begin: saying “the walls in my office” is a bit of a misnomer. It’s really more of a shed behind centerfield, and I also have quarters in Erie Insurance Arena. If I had to actually pick an “office” for myself, it would probably be the field itself.

I wasn’t always in grounds keeping. I came out of high school in the summer of 1995 working in the kitchen area. By the end of the first season, I became assistant director of concessions at the age of 18. I worked there until 1998. I knew the groundkeeper at the time and he convinced me to join his staff in 1999. After my second year in that department, I became his main assistant and worked at the Warner Theatre in the winter. From there, I took over as head groundskeeper in 2004.

There’s hard days, certainly, but I wouldn’t have been here so long if I didn’t like it. The people I’ve met, the players I work with – it’s not too shabby. If you’re curious, Curtis Granderson was one of the nicest players and Matt Walbeck (who managed in 2007) was one of my favorite managers. One of my all-time favorite players was Josh Rainwater, a pitcher who played from 2008-2010. 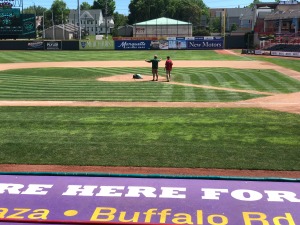 Always working with the team to ensure we’ve got it all right.

Before the team plays, my team is in charge of getting the field ready for them. We have a total staff of 17. There’s me, my assistant (full-time seasonal) and other part-time staff. Most have been around for over two years – their longevity in the job really helps us get a lot done efficiently.

Walking you through a typical day is difficult, but here’s this for starters: our day often starts at 8 a.m. and doesn’t end until an hour after the conclusion of the game. Yeah. We put in some long hours.

Cutting the grass once usually takes an hour of time. If we’re doing a new pattern, it can take up to five hours. It’s always fun thinking up new designs and doing things that haven’t been done. I don’t usually have a design in mind, though – I usually just get on the mower and see how I’m feeling.

My assistant usually works on the mounds and after that, the infields are taken care of and the dugouts are cleaned. We try to edge once every other homestand and we’ll sometimes do resodding if there’s a bad spot on the field. The field is fertilized every two weeks and once a month we aerate the field.

The staff does work throughout the day to get the Park ready.

Time is of the essence here, as we have to get things done before batting practice. Our ability to get things done is especially hard when there are also events that aren’t SeaWolves games. We have over 30 extra events this year, including several high school baseball games. They put wear on the grass and field, but most importantly, they cut into our time to get work done. We love kids’ camps and block parties and concerts, but they do bring about extra challenges for our job.

During the game, we’re working, too. We’re doing touch-ups throughout the game, and on bad weather days, we’re keeping the umpires up to date. I also keep in touch with Tom Atkins at WJET about what he’s seeing on radar. It’s usually my decision on whether to put the tarp out – you want the tarp to be placed just before bad weather comes, not as it’s already happening.

Rain days are the hardest, as removing water fast is difficult. But I’ve been here so long that all the issues we have start to repeat themselves and I know how to handle them. After all, I have been here since the park’s inception; I’ll be sure to have the Park ready to go day in and day out.