In 2002, the Erie County Convention Center Authority (Erie Events) completed a Master Plan for the Erie Sports, Cultural and Entertainment District.  This document was an outgrowth of the Authority’s strategic planning efforts and was developed with extensive input from various stakeholders, community and civic groups, elected officials, citizens, facility users and tenants including the Erie Otters and the Erie SeaWolves.  It comprises a sports and entertainment complex consisting of UPMC Park, Erie Insurance Arena and the Warner Theatre.

Since the Master Plan was completed, many critical elements envisioned in the plan have been realized including:

The next major step in completing the Master Plan consists of:  (1) the renovation of UPMC Park (now 25 years old); and (2) the full integration of UPMC Park with Erie Insurance Arena.  The integration of these two venues will create first-class facilities that are utilized to support both UPMC Park and Erie Insurance Arena, thus maximizing the year-round economic benefits of this undertaking.  At the same time, it will address two important elements that were deleted from the Erie Insurance Arena renovations due to budgetary constraints:  (1) team offices for the Arena’s major tenant, the Erie Otters; and (2) a team store for the Otters which is incorporated within the Arena and accessible on a year-rou 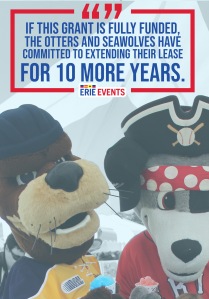 This UPMC Park $12 million grant request essentially completes the vision of the 2002 Master Plan by providing critical elements to the Complex, ensuring the Otters and Seawolves remain in Erie. In fact, if this grant is fully funded, the Otters and Seawolves each have committed to extending their leases for an additional 10 years!!!!  This commitment is enormous in terms of job retention, economic impact and the quality of life in NW Pennsylvania.

The completed Downtown Sports, Cultural and Entertainment District is an integral part of the Erie Downtown Development Corporation’s investment and provides the critical amenities necessary to make Erie’s Downtown an exciting place to live, a viable place to work and an enticing place to visit.

I hope you support our efforts in securing RACP funding for UPMC PARK.