When I look up, I see the future.

Except for when the ice fogs up my glasses.

As executive chef, one of my responsibilities at the Bayfront Convention Center is to make the ice sculptures you see at many of our events. Like, for instance, Wine on the Lake, which we had just a few weeks ago. 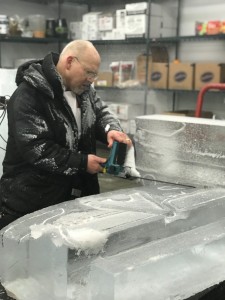 Me working on sculpting a car made of ice.

We used 12,000 pounds of ice and 29 blocks of ice. Signs with company logos on them take about four hours. Ice work at the bar takes about eight. The car I made, which you can see in these pictures, took 36 hours.

It’s quite the process. I’ve been carving for many years. I carved competitively, in fact. But when I was asked to write this blog, I didn’t want it to be about me.

I wanted it to be about the future. And the ice, of course, but mostly the future.

When I took this job, my goal was to give back to the community. Working with Jake Juliano, our sous chef, has given me one way to do that.

Jake has been here for about four years. He had never touched a block of ice before this, but Jake came in and said he wanted to learn.

Be careful what you wish for.

It’s a continual training and learning process, and we do everything by hand. The whole point of ice sculptures is to show emotion, and it’s an art form which, like many art forms nowadays, is becoming more technological than hand-crafted. But here, every ice block you see — company logos, figures, cars — is handmade by us.

With all the other responsibilities we have, it’s been off-and-on training for Jake. But when we had the chance, I gave him an ice block, showed him the basic cuts, and we started along in the process.

One of the signs that Jake worked on.

I’m excited to continue passing my knowledge on. Where Jake is now, he’s proficient at signs, support structures and that sort of thing. The next step is to work on figures and human anatomy.

With our power tools in hand, Jake will continue to grow. And as I’m working on my pieces, I can look up and see all the progress that Jake is making, too.

The future is bright.