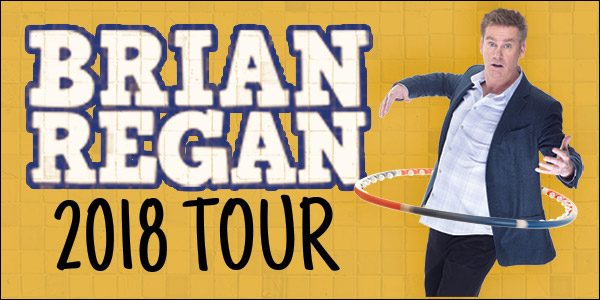 Tickets can be purchased at the Erie Insurance Arena box office, www.erieevents.com or by calling (814) 452-4857.

October 16, 2017 – Comedian Brian Regan announces spring 2018 tour dates for his non-stop theater tour going on sale Friday, October 20, 2017. The spring tour will visit 31 cities from January through the first week of June 2018. Regan visits close to 100 cities each year selling out the most beautiful venues in North America. A list of new tour dates is below. For more information and links to purchase tickets visit http://www.BrianRegan.com.

On November 21, Regan will star in his first Netflix special, Brian Regan: Nunchucks and Flamethrowers. The special is the first of a two-special deal with Netflix. Regan taped the special on June 23 and 24, 2017 at The Paramount Theatre in Denver.

On October 17, 2017 at 8:30PM, Regan will be seen in Peter Farrelly’s TV series, Loudermilk, on The Audience Network.

Regan will make his Carnegie Hall debut on November 11, 2017.

A regular on The Tonight Show Starring Jimmy Fallon, Regan will make his next appearance with Jimmy on November 8, 2017. Regan made 28 stand-up appearances on The Late Show With David Letterman, the most of any comic in the show’s 22 years on CBS.

Regan’s previous stand-up special, Brian Regan: Live from Radio City Music Hall (2015), was the first-ever live broadcast of a stand-up special in Comedy Central’s history. The special was critically acclaime with Vanity Fair calling Regan, “The funniest stand-up alive.” He made a scene-stealing cameo in Chris Rock’s film, Top Live, and was a guest on Seinfield’s Comedians in Cars Getting Coffee.