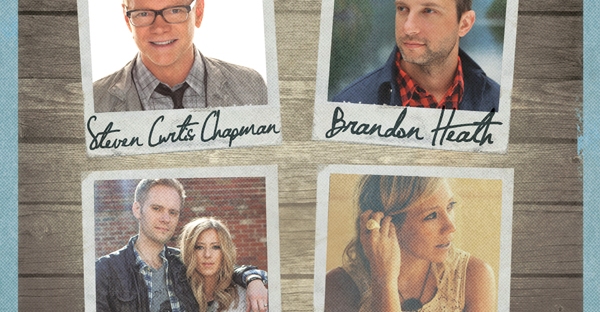 Tables bring people together and the vision for The Table Tour is no different—to build a community of artists and fans. The Table Tour is a unique concert-like experience showcasing artists coming together, sharing both in song and story, welcoming attendees to pull up a chair, and raising awareness and support for Feed the Children and their efforts to end childhood hunger in the United States.

The Table Tour is scheduled to make multiple stops around the United States this spring. Artists for the first leg of tour dates in February and March will include multiple-award-winning artists Brandon Heath, Love & The Outcome, and Nichole Nordeman. Then an additional set of concerts, to be announced shortly, hits the road in April and May. It will again feature Brandon Heath and Love & the Outcome, and adds iconic artist and song-writer Steven Curtis Chapman along with Ellie Holcomb, known as part of the band Drew Holcomb and the Neighbors, and now branching out as a solo artist.

Steven Curtis Chapman has sold over ten million records, two RIAA certified platinum albums and eight RIAA certified gold albums. He has received 5 GRAMMY © awards and an American Music Award. Steven has recorded 45 No. 1 US radio hits and been awarded 56 Dove Awards, more than any other artist to date. Since his recording career began in 1987, Chapman has recorded sixteen projects with Sparrow Records. He has performed at the White House and has appeared on multiple national programs via CBS, NBC, ABC, CNN, MSNBC, CMT, FOX News, the Hallmark Channel and E!, including Good Morning America, Larry King Live, CBS Sunday Morning, The Tonight Show with Jay Leno, and more. In 2001, Chapman and his wife Mary Beth created The Shaohannah’s Hope Ministry, now known as Show HOPE after bringing their first adopted daughter, Shaohannah, home from China. The ministry’s goal is to help families reduce the financial barrier of adoption, and has provided grants to thousands of families wishing to adopt orphans from around the world.

Brandon Heath has garnered 2 GRAMMY® nominations, 3 Dove Awards in 2009 including Male Vocalist of the Year, Song of the Year and Pop/Contemporary song, and the 2008 Dove Award for New Artist of the Year.

Inspired by God’s Word, Ellie Holcomb recorded and released two EPs full of songs based on the Psalms and other scriptures, Magnolia EP and With You Now. Even with zero dollars spent on promotion, the response to these two EPs was remarkable in a way Ellie never saw coming. To wit, they both hit #1 on the iTunes Christian/Gospel charts.

Proving that truth is stranger and more beautiful than any fiction, the husband-wife duo Love & The Outcome have packed their debut album with songs that speak to the faith journey they’ve braved these past few years. Vocalist Jodi King and her husband, bass player Chris Rademaker, have come a long way since selling their condo in Winnipeg, Manitoba (about 400 miles northwest of Minneapolis) in 2010. And the proof comes through the songs on their upcoming Word Records’ debut.